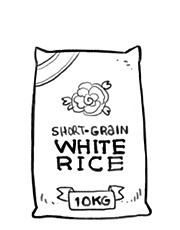 Short grain white rice is also known as uruchimai rice or sushi rice in the west. It consists of short translucent grains that develop a sticky texture when cooked. The most common cultivars include Koshihiraki, Akitakomachi, Sasanishiki and Calrose. Calrose is technically a medium-grain rice, but is commonly used in in North American in Japanese cuisine. White short grain rice is milled so that it has its husk, bran and germ removed. Doing this alters the flavor and look of the rice and helps extend its storage life. After the rice is milled, the rice is often polished so that it becomes even more white.

How to cook glutinous rice: Wash the rice to release excess starch, until water runs clear. Soak for 30 min (in summer) and 2h (in winter). Use a rice to water ratio of 1:1.25. Bring water to a boil, turn heat to low and cover pot with lid. Cook for 10 minutes. Let rest for 10 min.

Rice is the seed of the grass species Oryza sativa (asian rice) or Oryza glaberrima (african rice). Rice is the most important grain with regard to human nutrition and caloric intake, providing more than one-fifth of the calories consumed worldwide by humans. Many varieties of rice are fortified to reduce malnutrition.