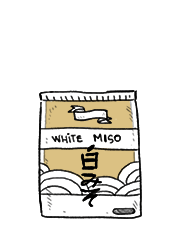 White miso, or Shiromiso (白味噌), is the most common type of miso. Its main ingredients include rice, barley, and a small quantity of soybeans. If there was a greater quantity of beans, the miso would turn a red or brown color. White miso has a very short fermentation time. It has a sweet taste, with a light umami taste.