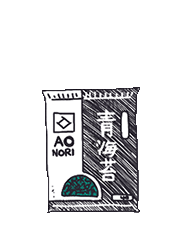 Aonori 青海苔, or green laver, is a type of edible green seaweed which includes species from the genus Monostroma and Ulva. It is referred to as aosa アオサ in some parts of Japan. The color of the aonori is intense, beautiful green. It has a distinctive fragrant green flavor. This type of seaweed is rich in calcium and is a moderate source of iodine.

Aonori is sold dried, and is used in soups and tempura. It is also sprinkled atop a variety of Japanese dishes like yakisoba and okonomiyaki.