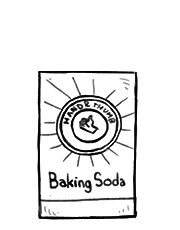 Sodium bicarbonate, also known as baking soda, is a chemical compound, a salt composed of a sodium cation (Na+) and a bicarbonate anion (HCO3−). It's a white solid that is crystalline but that often appears as a fine powder. It has a salty, alkaline taste. In cooking, it's used as a leavening agent.

When baking soda reacts with an acid, carbon dioxide is released which causes the expansion of baked goods. Acids that create this reactions include of tartar, lemon juice, buttermilk (plant milk + acid), cocoa and vinegar (ref).