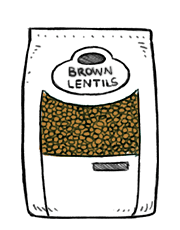 The most common variety of lentils, found in most grocery stores. They have a mild, earthy-flavor, with a firm texture that doesn't disintegrate when cooked.