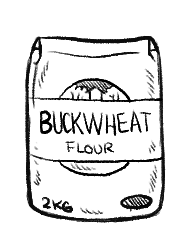 Buckwheat flour is made from ground buckwheat groats. It is often used partially in recipes with wheat flour. Use buckwheat flour for making buckwheat pancakes, noodles, and as a replacement for wheat flour in baked goods. As buckwheat contains no gluten, it may be eaten by people with gluten-related disorders.

Buckwheat groats come from the buckwheat plant, or Fagopyrum esculentum. Buckwheat is not a wheat, but a 'pseudocereal' that is related to sorrel, knotweed and rhubarb. The groats can also be sprouted and then eaten raw or cooked. Buckwheat groats have a rich, nutty flavor, and are a good source of zinc and of the protein lysine.

The groats can be processed into flour, made into beer, roasted and brewed as tea to make soba-cha そば茶 and cooked like rice.