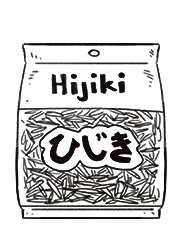 Hijiki, or 羊栖菜, is a brown edible seaweed, often sold in dry form. Hijiki is rich in calcium and iron.

Recent studies have shown that hijiki contains potentially toxic quantities of inorganic arsenic, and the food safety agencies of several countries (excluding Japan), including Canada, the United Kingdom, and the United States, have advised against its consumption (ref).