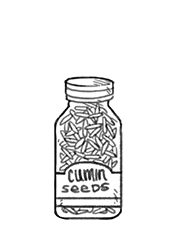 Cumin, or Cuminum cymimum is a plant of the family Apiaceae. It's seeds are dried and used both whole and ground. Cumin seed is used as a spice for its distinctive flavour and aroma, it imparts an earthy, warming and aromatic character to food. Cumin is a source of iron.

Cumin is often confused with caraway (Carum carvi), and many European languages don't distinguish between the two. Nigella sativa, or black cumin, is distantly related and also sometimes confused with cumin.