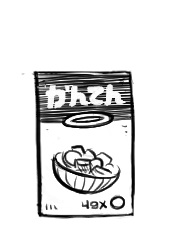 Kanten is a seaweed-based gelling agent derived from tengusa テングサ, a specific type of red seaweed. It is semi-translucent, and firm when it solidifies. Kanten is 80 percent fiber, and has no odor or taste.

It is used to make Japanese confectionery, and unlike gelatin kanten-based confections don't dissolve at room temperature. Kanten is often confused with agar agar. Both are seaweed-based, but they come from different algea. Kanten can be swapped 1:1 with agar agar in a recipe, although the resulting texture will not be the same. Kanten produces a firmer texture than agar.