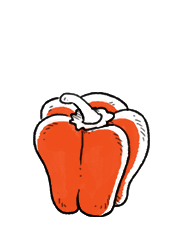 Red bell peppers, or capsicum, are medium to large in size, with a firm skin that is crisp and juicy. They have a sweet and fruity flavor. Red bell peppers are simply ripened green bell peppers, and are a good source of vitamin C and vitamin A.

They can be served raw, or baked, sauteed, roasted and grilled. Red bell peppers keep 1-2 weeks when stored unwashed in the refrigerator.