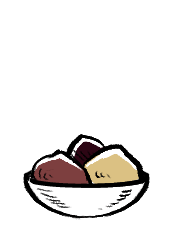 Soy beans are a species of legumes, widely grown for its edible bean. 1/2 cup of dried soybeans equals one serving of the 3-4 servings of protein required for good health. It is also a good source of Omega 3's (ALA).

Unfermented food uses of soy beans include soy milk and tofu, while fermented soy foods include soy sauce, miso, natto and tempeh. A staple in Eastern Asia, soybeans are used as a base for many vegan faux-meat dishes.